I thought I’d publish a short post on repairing my Warlock after the 2015 High Frontier launch.  I flew it in the Warlock Drag Race and while the up part was just fine, the landing was not so much.  I landed on the asphalt runway and one of the composite fins took the brunt of the landing.  It pretty much crushed the lower corner of the fin and then started to splay the fiberglass skin of the fin apart.

I might have been able to repair it but it would have been a very weak fin and probably would not have withstood another landing without taking damage again.  Instead I decided that my best route would be to cut the current fin off at the body tube and graft another one into place.

These fins are through the wall type fins, meaning that they extend into the body tube and are glued to the motor mount on the inside of the rocket.  I didn’t want to try and remove my rear bulkhead in order to gain access to the fin root, hence my decision to cut the fin off at the outer body tube and graft a replacement on at that point.

In order to provide some strength I decided that I would take my new fin and add a tang that would fin into a clevis that would be put into the part of the fin that was still inside the body tube.  I got some birch plywood that would fit into the composite material between the fiberglass skins.  I decided how deep I wanted the tang to be and cut the plywood accordingly. 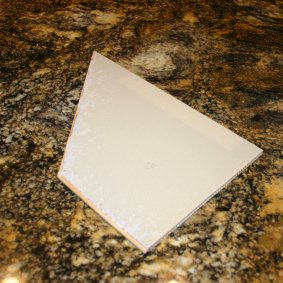 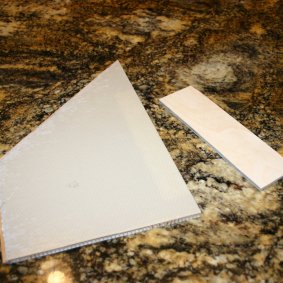 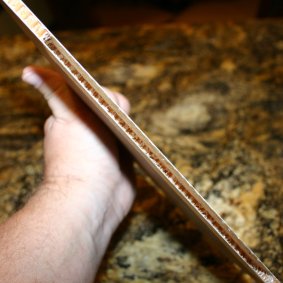 Now I needed to remove the Nomex  honeycomb where the plywood tang would go.  I got my Dremel tool out and put in a straight router bit and started removing Nomex.  When I got the depth I thought I needed I pushed the plywood into the space to check the fit.  After several iterations of routing and checking, I finally had the clevis done.  Now I had to do the same thing to the new fin in order to place the tang.

Once that was complete I mixed up some West Systems epoxy to put the tang in the fin. I wiped the excess that oozed out of the slot and set it aside to set up.  The next day I used some more West Systems to glue the new fin into the piece that remained in the body.  The next day I used some 30 minute epoxy to add new fillets to the fin and the process was complete.  I did do a test flight at Leonard to make sure the new fin was as strong as it looked.  The test flight was fine.  It even landed on the repaired fin with no damage.  Now all that was left was to fix the paint job.

At least that was what I thought.  I later found a crack around the circumference of the bulkhead in the nosecone.  Now I need to stabilize that before I can fly it again.  I’m thinking of using three flat head wood screws to hold the bulkhead in place and then put a new epoxy ring around the bulkhead hold everything in place.  Hopefully it will be ready to fly at the start of next season.

This site uses Akismet to reduce spam. Learn how your comment data is processed.