This is another one of my long-term projects.  I started it several years ago.  It got put aside because of other more important things and other distractions so I never found the time to get back into it until now. 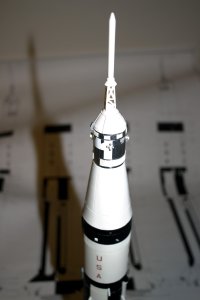 Before I put it down, I had nearly finished the upper part of the model from the interstage to the Launch Escape System.  I used the Apollo Conversion kit from RealSpace Models to replace the obviously undersized parts that were included in the kit.  RealSpace has improved the conversion kit since I purchased mine.  It now comes with a pewter LES rocket and photo etched tower (I had to use the one that came in the Airfix kit).  The details on the CSM are also improved since I bought mine.  If I do another one, I’ll definitely purchase one of his new ones.

To do the black roll patterns on the interstage, I made some black decals and applied them to the model.  It looks pretty good and I didn’t have to mask over the raised detail on the interstage.  That is never a fun job.  I made all the decals myself and printed them on my Alps 1300 printer.  I used the detailed drawings by David Weeks (also available from RealSpace Models) to create my decals.   David’s drawings are invaluable if you want to get anywhere close to accurate.  I didn’t add nearly as much detail as I could have using his drawings.

I could have done more to make the model more accurate but to me that just gets tedious.  I’ll add enough detail to satisfy myself and that’s good enough.

When I picked the model back up, the first stage was completed, but had only been primed.  It still needed final paint and decals.  I had started scribing dividing lines for the antenna frames.  Airfix just had them as rectangular blocks between the oxidizer and fuel tanks, but they were really two pieces.  Also they had all the antennas the same size.  When actually the only ones that were the same were the ones at quad I and III.  The antennas at quad IV  were different and at quad II they were only on one of the antenna frames.  So when I started to work on the first stage I decided that I would fix the antennas. END_OF_DOCUMENT_TOKEN_TO_BE_REPLACED

I had just finished watching Oklahoma State get past Kansas St. and was watching the news.  They were reporting on the 4.6 quake that happened earlier that morning around 2:30am.  When I started feeling some shaking and a rumble sound like a semi-truck going down Delaware.  The talking head said that they were feeling an earthquake.

The shaking continued and got worse.  It was quite frightening.  I wasn’t in panic mode, I was still sitting in my recliner after all.  But all the same, it was frightening.  The TV was rocking back and forth, my reading light was shaking and I could hear the house creaking.  It seemed to go on for minutes, but I think it was more like 45 seconds or so.  There was no apparent damage to the house and nothing fell off the walls.

California can keep these things.  Very disconcerting.  I’ll gladly take my chances with tornadoes, at least I get some warning that it’s coming.

I just finished processing my first astrophoto.  It is of M42, the Orion Nebula.  Actually this is about the 8th or 9th version.  I think this is the one I’ll keep.  I think it is not too bad considering it is my first attempt at image processing and it is a composite of only 15 frames.

It is an LRGB image at 6,3,3,3.  That means that there are four layers that make up the image.  Luminance, red, green and blue layers.  The numbers indicate the minutes of exposure for each layer.  I did 6 minutes of clear (no filter) that consisted of a combination of 6 frames of 1 minute exposures, and each color layer is 3 frames of 1 minute each.

I stacked the frames of each layer separately with DeepSkyStacker.  I then used PixInsight LE to combine the color layers into an RGB image.  Then I did some histogram stretches and saved the image as a tiff file.  The luminance layer was also stretched in PixInsight LE.  Then I loaded the RGB into Paintshop Pro X2 and did some more fiddeling.  Once I had the colors that I wanted I loaded the luminance layer as a transparent layer over the color image and did a bit more processing before saving the final result.

This is what the stacked red layer looks like before processing.

The images were taken with the LB0003 telescope at LightBuckets, an internet telescope rental site.  This is a 12 inch Ritchey-Chretien reflecting telescope.  I hope to rent some more time soon to either add more frames of this subject or possibly something new.  I think it is a great concept.

If you are truly scientifically minded, all the climate change warnings may have you a bit skeptical.  At least you should be.  I’ve been skeptical for some time, even though it seems I’m one of the very few.  There are a few bright spots where others with some voice in the press and media have attempted to steer the debate back to a more scientific line, rather than the political fervor it has come to on both sides of the debate.  While there is actual scientific evidence that the earth is indeed warming, and we humans are surely contributors, the exact cause is as yet in doubt.

A few years ago I noticed a piece by John Stossel questioning the conclusions in Al Gore’s ‘An Inconvenient Truth’.  Apparently it was inconvenient for Gore to answer any questions because he refused to do an interview with Stossel for the article.  Later that year Stossel did another story on the climate change consensus.

Then a few months later in the Wall Street Journal’s Opinion section there was an excerpt from a lecture given at the California Institute of Technology by the late Michael Crichton in 2003.  In it he explores the way science has changed for the worse over the years.  I’ve posted the full text of the lecture with a few notes at the beginning.  The lecture is excellent reading.  Please take the time to check it out.

Note: a few changes have been made to this post since its original 2008 posting.