I’ve been working on this post for a while.  Since it is May 4th, I figured why not post it now.  So here is a long delayed post on my latest Star Wars build.

I’m building the BanDai 1/72 scale X-Wing Red 5 to go along with they Millennium Falcon that I built last year.

I started with a look through the parts to check for damage or anything else of interest.  Being a space nerd I quickly found a Saturn V third stage part that was being used for the intakes on the X-Wing.

I also noticed that the open cockpit canopy had a break in it.  I should be able to fix that without much trouble as long as it doesn’t break when pushing the parts back into position.

I partially assembled some of the parts before spraying on the primer.  Some of the parts are pre-colored but since I’ll be using the decals for those parts I sprayed primer over them.

I also sprayed the rest of the parts on their runners.  After the primer had set I sprayed all the parts with the base color of White Gray, except for the droids which got painted white.

I decided to start with the figures first.  I assembled both R2-D2 and R2-D4.  R2-D2 got his dome painted silver before assembly.  The pilot figures were painted with black, orange, white, aged white, flesh, gray, and transparent orange.  The droids (other than R2-D2’s dome) were painted white. 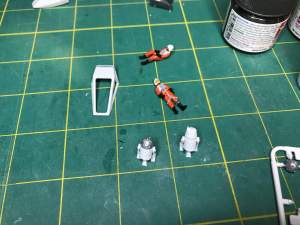